What Haven't I Done? Glad You Asked.

A list of things I haven't done.  Most of these things will never, ever, EVER happen.  The others? I'm open.

2. Eaten shellfish. [It's just giant bugs, and don't try to tell me any different. You're fooling yourself.]

7. Been comfortable wearing jeans. [There's something about the texture of denim I find very off-putting.  It's too abrasive for me.]

8. Gone sky diving.  [Seriously? The entire point is to stay in the plane.]

15. Gone hunting. [Except for bargains.  That's the same thing, right?]

16. Toilet papered someone's house.  [I may be up for this, if the target is right.]

18. Been to a political conventions.  [I do have a hankering to wear a silly hat.]


What things have you never done? Or do you want to do? Or are you compulsively doing? Actually, that last thing could be a very interesting blog post on its own.


Bogarted from here, with liberties taken because I can't count to 22 when I'm tired. So. Much. Math.

Posted by Suniverse at 9:00 AM 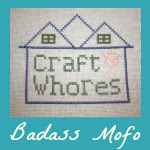